Add a tracking code to a site using Code Snippets?

Is there a write up on using the Code Snippets extension to add a tracking code to a site that uses Oxygen Builder (and therefore does not process the themes header.php or footer.php were one would normally place the code)?

I have a write up here: Adding custom header, footer & body code to WordPress via MainWP Code Snippets Extension - KronosLabs

That’s unfortunate. Sites using the Oxygen Builder plugin do not process the functions.php file. I was hoping to avoid having to install the Insert Headers and Footers plugin that Oxygen suggests as a solution.

It’s actually unfortunate that the Oxegyn Builder has decided to desregard the file that every plugin and theme known to the WP community uses to make customizations.

I don’t know anything about Oxegen builder but that sounds like a locked in pain.

@qpgltdco Yeah this isn’t making sense - Oxegen Builder doesn’t have a functions.php file to edit but any base theme in WP does… They suggest using custom plugins instead of directly altering their functions.php file simply because if you alter those files without a Child Theme you risk loosing your code. - which suggests that the functions.php file is still utilized in some way. 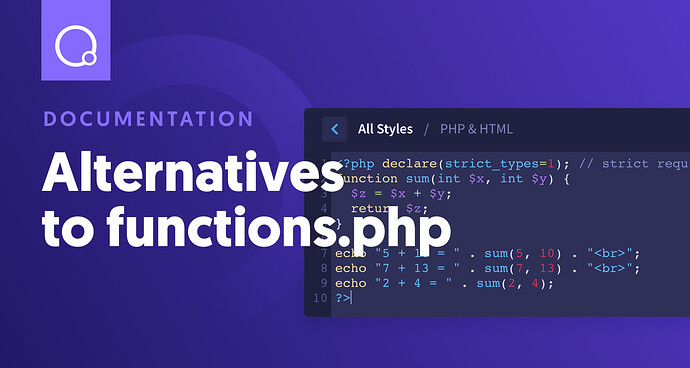 If you need to put some custom PHP functions somewhere, and using an Oxygen Code Block isn't appropriate, put your functionality in a plugin.

When the Oxygen plugin is active the WordPress theme is disabled.

Will my theme work with Oxygen?

No. Oxygen completely disables the WordPress theme system. This means that while your theme won’t conflict with Oxygen, its styles and layout also won’t be applied to your site while Oxygen is active.

This is not correct, as you can read in the documentation:

I think the usage of a Header/Footer plugin would be the most simple solution. These plugins are very light, so it shouldn’t hurt your performance.

@qpgltdco
To map it out exactly how the Code Snippet extension functions:

Not to get off the main point in my response - adding code snippets to a Child Site that is utilizing Oxygen Builder should still function as intended even though it “disables” the default Theme rendering it’s functions.php file useless because It’s got nothing to do with the theme.

Oxygen recommends in their documentation to create Custom Plugins in order to extend functionality via code snippets. Within the link I posted above they reference this article: Why You Shouldn't Add Custom Code to functions.php – WPMU DEV

The code snippets used in my writeup would most likely be the same used in any plugin you would install via WP repository.

To get you started, we’ll give you a rough framework to add code to both your header, footer & body of any Child Site connected to MainWP.