When an update is announced/released, it seems to be a roll out to sites that have it installed. What I mean by this is this: if Plugin X has an update, I can go into Site 1 and see the update is available. If I go into Site 2, it may not seem there is an update available until an hour or two later.

When an important update is available, we like to go in and update that plugin on all sites that have it. Going into Update/Plugins, we may only see 6 sites to update initially. Going in later, we may see 10 other sites appear for an update.

Is there a way to update a plugin across all sites regardless of it the site knows about it?

@DigitalMaestro Usually when one Child Site reports that there is a plugin update and you know that there are other Child Sites that plugin is installed on but it’s not currently reporting as so - you will want to run a Re-Sync by clicking the “Sync Dashboard With Child Sites” button a the top of the screen.

If it’s still not showing up and it’s specific to a “Premium” plugin that’s just not showing up on the Child Site’s Dashboard as needing an update - you may “FORCE” it by utilizing the MainWP > Plugins Install Plugins & make sure that “Override Current Version” is checked - then push your updates to your network. 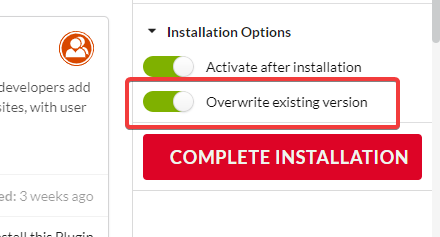 If you continue to have an issue please let us know.

The sites were resync’d- I think the issue was that some of the Child Sites were not aware of the update yet (very existential sounding!)

I think the idea of Reinstalling and Overwriting is the option I am looking for! I am going to try that out. Looking at the Install Plugin screen, I see I can search for the plugin, and then check off wich Child Site I want to install (with Overwrite existing version checked off). Is there a way to see which sites have an older version from this screen?

It’s not possible to see which sites have an older version from that screen.

You’d need to check on Manage Plugins page. You can also filter the search by the plugin name to make things less cluttered. 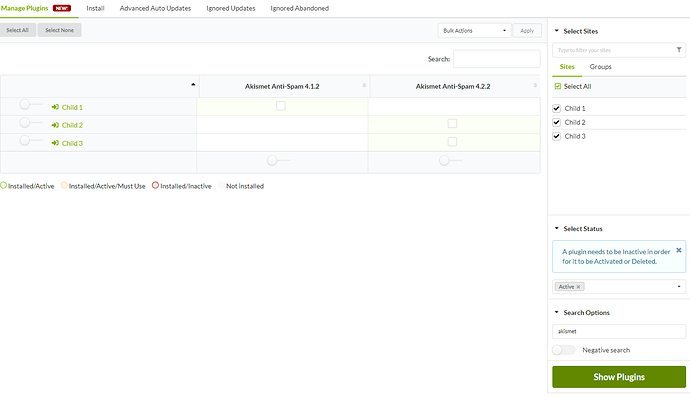 When an important update is available, we like to go in and update that plugin on all sites that have it. Going into Update/Plugins, we may only see 6 sites to update initially. Going in later, we may see 10 other sites appear for an update.

Not to clutter the thread but I’d like to remind everyone that some plugins/themes do “staged rollouts” so some of your sites may get an update notice before others.

Absolutely! That is what I was trying to address - on a staged rollout, I wanted to update ALL sites that had the plugin all at once instead of updating a handful of the sites here and there. We have 117 sites on MainWP so knocking them all out at once would be great.

Thanks, @dennis, for the phrase that I could not seem to think of, “Staged Rollouts”!

Next time you see a site not aware of an update, delete these transients.

It could be a snippet, so you can force update check on all of your sites before syncing.

This topic was automatically closed 24 hours after the last reply. New replies are no longer allowed.