How to re-add a subsite in multisite Wordpress

Only this is a subsite of a WordPress multisite. I can’t turn the plugin off for just one subsite.

@kwoodall That’s one of the unfortunate downfalls of running MainWP on a multi-site installation.

MainWP is designed to only allow one Child Plugin connection at a time for a single site. I would simply try deactivating the MainWP Child Plugin and then reactivating it. Then test to see if that “unlocked” the connection. 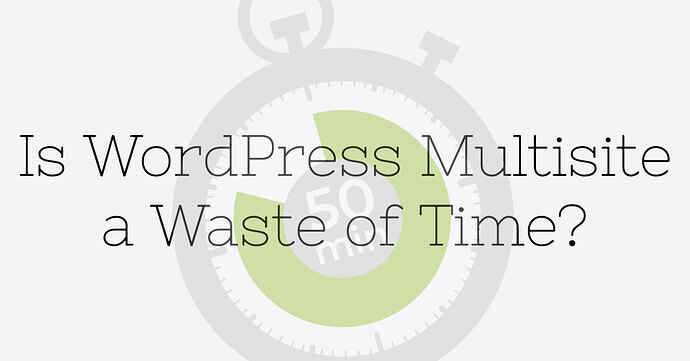 Why Multisite is a Waste of Time - MainWP WordPress Management

If you use MainWP for managing your child sites, you already have a way to update plugins, themes, and push different code changes to those sites without

First off, I never said the MainWP dashboard was on a WordPress Multisite. Secondly, before ever using MainWP on the multisite, I consulted with your people to confirm it was supported.

So now the question comes back. How do I reset MainWP Child on a SINGLE subsite?

@kwoodall I’m sorry that I miss understood your question. I now understand that Your Child Site is on a Multisite installation.

However, my suggestion is still going to remain the same, due to how WP Multisite installations function.

MainWP is designed to only allow one Child Plugin connection at a time for a sigle site. I would simply try deactivating the MainWP Child Plugin and then reactivating it. Then test to see if that “unlocked” the connection.

As I pointed out in my original post it’s not practical to turn off MainWP Child because it would affect ALL subsites. This is a problem I would think MainWP would want to address soon. Especially since MainWP does promote Multisite compatibility.

That is not quite correct. From the far begging, we have clearly stated in multiple places that MainWP is not designed for WPMS setups and we don’t run any tests on multisite setups. Basically, we just have some feedback from other users it works for some (probably not all features) but some users have problems with Multisite setups but this is not something that we can support.

Here is just a few spots where we have this warning:

We have it stated in Pre-install FAQs:

Then, in the first help document: MainWP Introduction:

And alsy, under the System Status on both MainWP Dashboard and Child plugin, the check will fail if WPMS detected:

My sincerest apologies if any information on our website misled you. Also, I would really appreciate if you could show me where did you find that we promote WPMS compatibility so we can clear that up and eliminate any potential confusion in the future.

As I mentioned before, I contacted MainWP to be sure I could use MainWP Child on a WPMS and was told it worked before I began on this project.

As I mentioned before, I contacted MainWP to be sure I could use MainWP Child on a WPMS and was told it worked before I began on this project.

Hi @kwoodall , I looked through your tickets going back to 2016, and I do not see any discussion on WPMS; can you give me the ticket number so I can review it and train support where needed?

As @bogdan mentioned earlier, we clearly state that we do not support WordPress Multisite (WPMS), so I would want to be sure that is corrected and the correct response is given to anyone asking.