Issue with SEOPress for MainWP

Hello,
I am playing around with SEOPress for MainWP but I ran into issues…
I select a site, click load settings → wait at least 2 to 3 minutes then if I click on another tab like Title, my browser freeze and become unresponsive… Does anyone else have the same issue?
I have SEOPress, SEOPress Pro, and SEOPress Main WP installed and also, the site I am trying to load (https://wpexpert.ca) has both SEOPress plugins installed.

More testing and it looks like if the tab is not loaded yet when you click on it (for example analytics), the spin starts, the browser freezes and after 1 min or so everything is back to normal… Then if you click back on the tabs already opened, it works, no issue, loads instantly.

if it’s not already done, can you open a support ticket from SEOPress customer area please?

I had the same issue. So, if you click on another tab in the extension while it is doing its magic it pings the CPU and causes the server to become unresponsive until all the processes have been completed.

Hi @SEOPress - is it not an issue with MainWP? The problem will be that I will not give access to our mainwp site to your team as we have more than 180 sites connected… And from @kwsim message, he is seeing the same issue so something is definitely wrong with SEOPress and MainWP integration.

Ok @SEOPress and @dennis something is really wrong with SEOPress and MainWP. I was on the dashboard of WordPress to turn off all SEOPress functionalities and the site went unresponsive and crashed my browser… Something must be conflicting with SEOPress but, as of today, I uninstalled the 3 plugins: SEOPress free, SEOPress PRO and MainWPSEOPRess. Very instable!

Thanks. Keep us posted as I would love to have it in our MainWP dashboard… As @dennis mentioned in another post, I would like to thank you for bringing this extension to our community, really appreciate it. I am sure you will figure it out. When ready, I can put it back on and do some testing again.

We have released an update for SEOPress Free (5.9.0.4) and SEOPress PRO (5.9.0.1) that should improve things with the SEOPress for MainWP add-on.

Hope it will solve your issue.

Hi @SEOPress,
Better, no more issues on the main dashboard with last version. I was able to deactivate all the functionalities of SEOPress for our MainWP install, no more browser crashed. That is for the good news.
For the bad news, the load settings doesn’t work! Here is what I see in MainWP dashboard after I loaded our SEO settings from our main website: https://wpexpert.ca 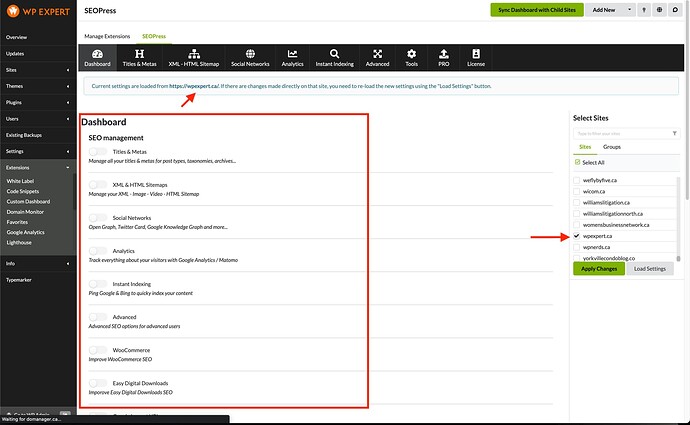 And here are the setup of SEOPress on the site itself: 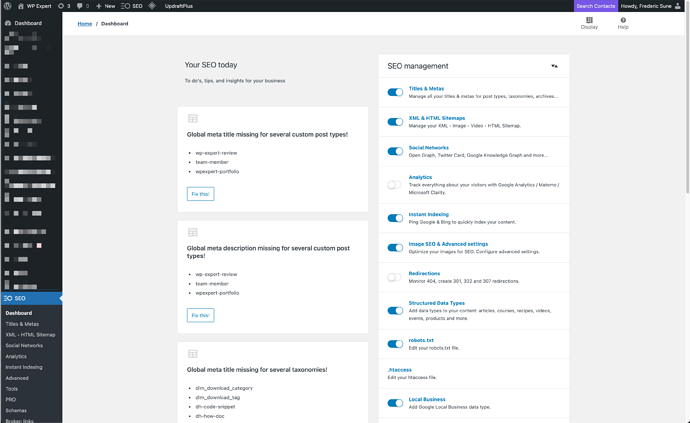 Oh, another update, I was trying to click on the other SEOPress tabs in MainWP to see if maybe, another config is there but, the site went unresponsive and but didn’t crash this time… Better but still not working properly.