I found this, about the language setting:

How to switch MainWP language? Support

It seems to be set to site language but I want in my user language.

This says that MainWP will be in the main langauge of the site. How do I select the language per user? Team members prefer different languages.

Each user can have MainWP Dashboard displayed in their own preferred language by selecting it from the Language dropdown on the WP Admin > Users > Profile page. 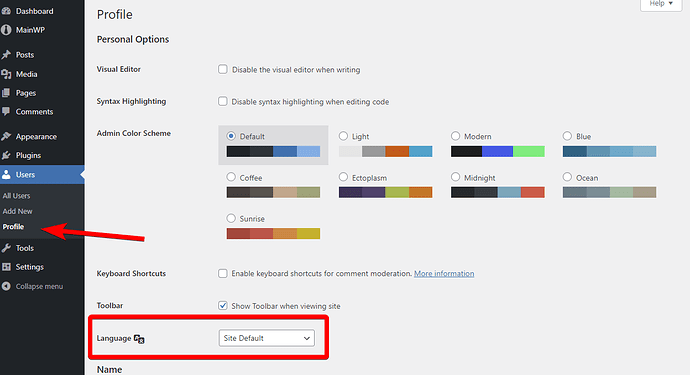 Thanks, Bojan. This is indeed, how it usually works in WP, and it was the first thing I tried before coming here. But it didn’t work. So now I tried again, and this is what I got:

Now I assume, that is not on purpose …
I have no plugin installed that is not for or part of MainWP, in particular no language related plugins.

Thanks for the update.

We’ve just tested this scenario, and our MainWP was in English, while the site language was in German.
This was the case for both the Administrator account and the accounts created in Team Control that had limited privileges.

Would you mind opening a private Help Desk ticket so we can collect some additional information & investigate further?

Thank for testing. Ticket is posted…